Historic Italian Villa On Lake Maggiore Hits The Market For €6,800,000 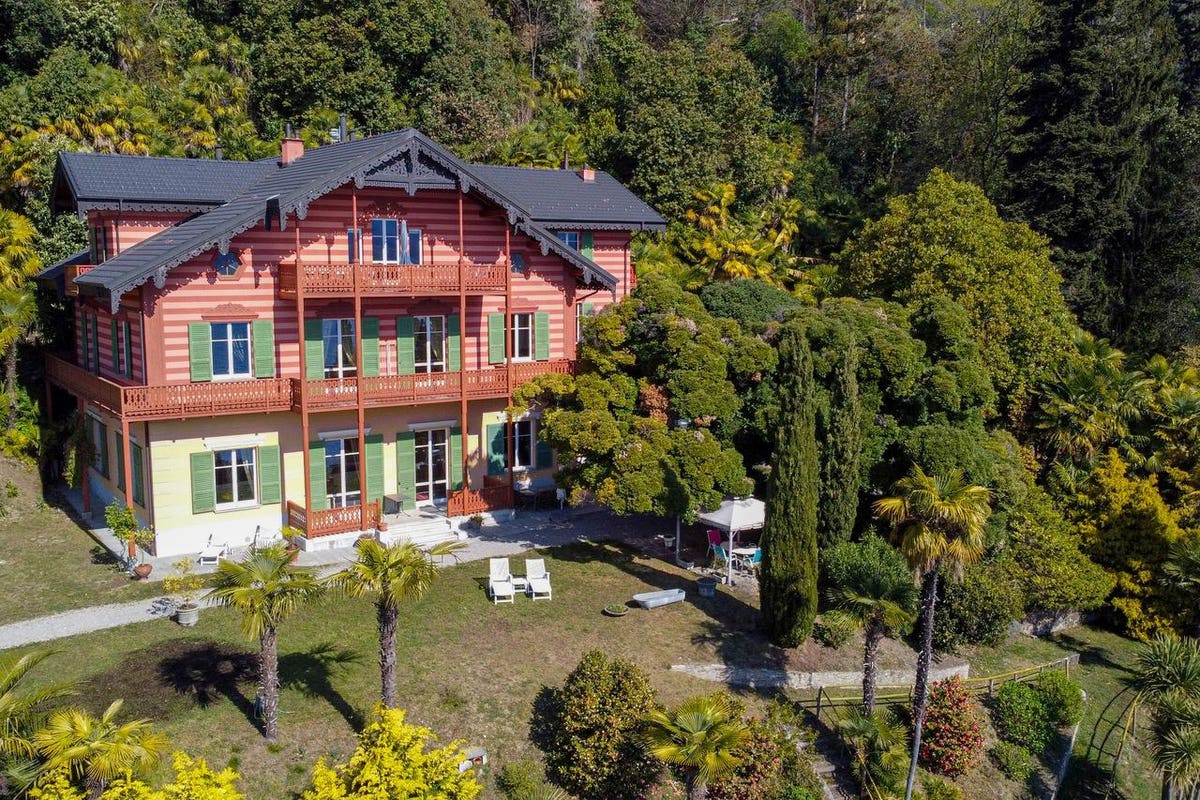 Villa Ada, situated above Lake Maggiore, was built in 1866 by the Trubetskoy family. The family descends from Dmitry of Bryansk, who was the son of Algirdas, ruler of medieval Lithuania. Pyotr Trubetskoy, a Russian diplomat, moved to Italy in 1865 on a diplomatic mission. There he met Ada Winans, an American lyric singer. The villa bears her name to this day. It has just been offered for sale for €6,800,000.

The heritage of the house may be international, but its architecture is that of a traditional Alpine chalet, with wood siding, pitched roofs, verandahs, shutters and decorative jigsaw-cut woodwork on the verandah spindles, eaves and roof overhangs.

Pyotr was a keen botanist, and the house was positioned in an ideal location for a botanic garden. Characterized by huge palm trees, it includes a splendid winter garden which, in the past, was used as an orangery and lemon house. Today, the space is used as a place of relaxation with an imposing fireplace and wood-burning oven.

Perhaps the most favored element of the grounds is the private beach on Lake Maggiore.

With nine bedrooms and ten baths, the villa measures 900 square meters, or just over 9,687 square feet. The ground floor includes a bright and elegant living room, a music room, the kitchen and dining room. What Europeans call the first floor is occupied by two separate flats, each with a private bathroom and kitchenette. This level also houses the primary bedroom, which has a large private terrace that provides striking lake views.

The floor above has four apartments, each with a private bathroom and a kitchenette. Some of these units also boast a private balcony characterized by a breathtaking lake view. On the attic floor is a mini apartment in, while technical systems are housed in the basement.

The villa has the amenities sought by today’s homeowners, including an elevator, alarm system, spa, gym and a caretaker’s house.

During its 19th century heyday, the villa hosted many parties and A-listers, including the actress Eleonora Duse, the painter Daniele Ranzoni and United States President Ulysses S. Grant. Many personalities from the world of art and politics visited Villa Ada, including the painter Tranquillo Cremona, the sculptor Giuseppe Grandi and the composer Alfredo Catalani. One of Pyotr’s sons, Paolo Trubetskoy, also grew up on the property and became a sculptor of international renown.

Today, Lake Maggiore is a magnet for homebuyers who appreciate its proximity to Milan, Turin and Geneva. Overlooked by grand mountains, the lake makes for a climate that, unlike its surroundings, is mild in both summer and winter. Thus, while snow-capped peaks are visible from the villa, the local weather is more Mediterranean than Alpine, and many area gardens grow rare and exotic plants. This comfortable environment, coupled with dramatic mountain views and easy transportation, have made the area a favorite for homebuyers from northern areas. In recent years, there have been many buyers from northern Europe, including Denmark (30%), Germany (26%), the Netherlands and Switzerland (10%). Also buying homes on Lake Maggiore are Americans, who account for 25% of recent real estate sales.